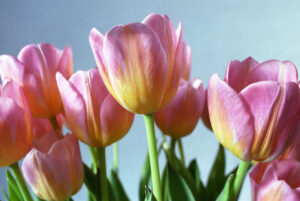 This message is not at all about flowers, even though there are 11 pictures of flowers below. It’s the story of a withering fascination with reality, maybe even the loss of sanity. Although at this point I wouldn’t go that far, there are certainly signs the withdrawal from reality can have detrimental effects on ones sanity. Several flowers have been harmed (ie picked) during the creation of these pictures, for which I sincerely apologize.

Shot with my Nikon FM2 + Carl Zeiss 2/28. Until 2009 I had no idea how to photograph. Maybe I still don’t but 2009 marked a turning point involving many flowers. The flowers in fields allowed me to explore focus. I started to understand it was not the be-all end-all of photography.

Still in sharp focus, as we’re told in life is how it should be, this is part of a series where the focus is eventually lost and everything becomes background. Light and colour are more important in this, still rather obviously picturesque, photograph of a poppy, my favourite flower. Shot with my EOS 1Ds II with Carl Zeiss 1.4/50 @ f/2.2.

Light and colour are starting to shift already. There is only accidental focus in the upper left, this was not intentional, I remember being in conflict as to where to focus exactly, because the background had to be just the right amount of blurred.

‘Misfocused’ on purpose. Why must the nearest object be in focus, or the largest or brightest. Who decides what the actual subject is anyway? This picture of sunflowers would not be as attention grabbing had the nearest flower been in focus. However, I noticed often the intentionally wrong focus could be mistaken for misfocusing out of incompetence, which was quite tough on my self esteem. This photograph was a necessary step I think but in other respects a failure.

Contrasts and story, guided by the light. Even though it is a found scene, it has a highly constructed feel to it, not in the least because of the many juxtapositions brought out by the specific viewpoint.

My favourite flower one last time, in a man-made configuration, in focus, stripped bare of its surrounding reality, which apparently went up in smoke.

2011 had me thinking about composition a lot and, again, the role of focus therein. Trying to grasp a stronger foothold on the benefits of (foreground) blur that started to emerge two years earlier. Nowadays I often use objects or hints of objects in the foreground to enhance the feel of space or place in a photograph.

As photographers we are necessarily deeply emerged in the physics of reality, physics regarding light and materials, behaviour in gravity etc. (‘Why won’t this just float in space here’ I have often lamented in my studio). Light is what we photographers paint with and there is much more to it than I thought when I started in 2005. Color, intensity, directionality, these are all obvious properties of light but so much more influential and exploitable once you dive into this so called reality.

Nowadays I seldom take my camera with me on walks. But I am constantly reminded of light. The sun not only provides the necessary energy that allows us all, animate and inanimate objects alike, to live here on this planet; but also the light to see our shared reality. I see it shining through objects, grazing surfaces, breaking, scattering, focusing, diffusing. All the rays enter through my irises, are processed by my brain which invents the colours and hidden parts for my benefit and then some of the work emerges into my conscious mind from time to time.

This reality, this light, only exists in my mind.

The previous years I had been working on creating the photograph from within rather than as an observer, even though that is impossible by definition. From within the situation or present I mean. It could only lead to dissapointment regarding the endeavour, but resulting work was sometimes aesthetically pleasing enough. This sunlit flowerbed was shot with my Pentax 645D.

The years directly leading up to and including my studying at the Fotoacademie were marked for an important part by a search for spontaneity. Allowing chaos back in my photography, letting go. This I started in 2011 by using a Zeiss Ikon Nettar folding camera to make double exposures. At the Fotoacademie they urged me to let myself be surprised by the results. They ment: ‘stop holding the reigns so tight you control freak’. It was true, after the initial departure from sharpness for sharpness’ sake I had unwillingly returned to controlling everything about the blur. These tulips were in a vase on our dinner table and I shot them just to finish a roll in my Contax G1 + 45 mm f/2.

This last picture of a flower is a result of working together with Marieta Landkroon on a project called ‘Neon Demon’ (after the film of the same name). I think it’s safe to say reality went out of the window with this one.

If you enjoyed these photographs: they are for sale in a limited edition of 5 + 1 AP each. Prices, sizes and availability vary. At the time of writing these 11 pictures of flowers are all still available. Contact me if you want one.