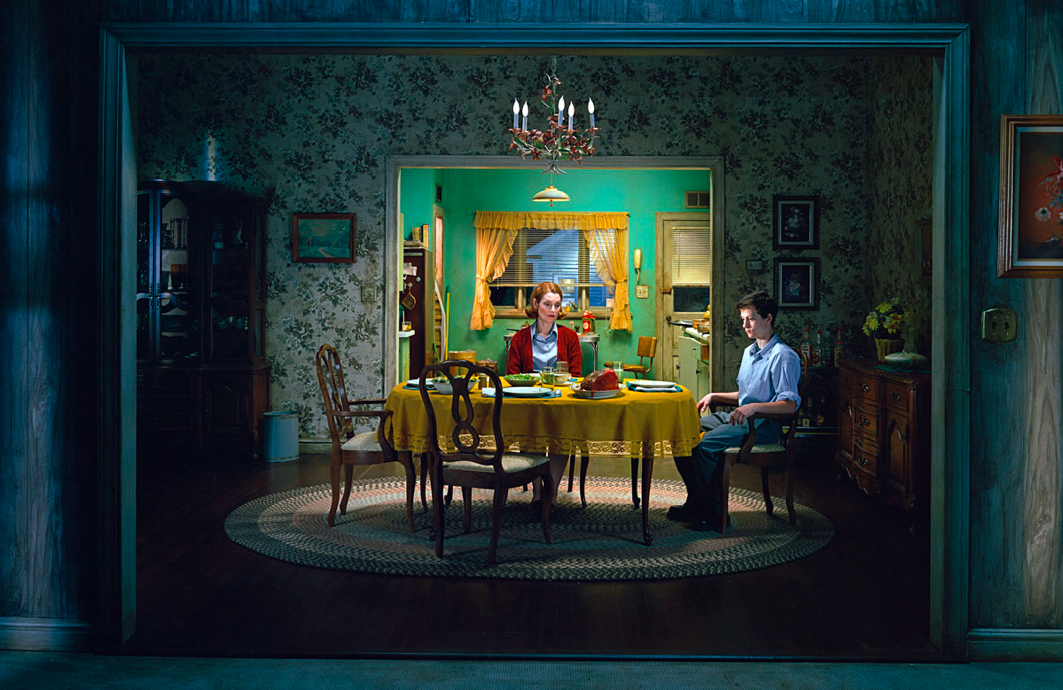 The first photobook I ever bought was ‘1985-2005’ by Gregory Crewdson. As a wannabe photographer I was very impressed with his cinematic style rooted in popular culture. Gregory Crewdson (born 1962, Brooklyn, NY) can condense a whole story into one perfect frame. To accomplish this he works like a movie director on gigantic sets together with cinematographers such as his director of photography Richard Sands. Check out the documentary Brief encounters (2012) to see him at work.

His father was a psychiatrist who practiced in the cellar of their brownstone home. What happened there was, of course, surrounded by secrets to little Gregory. One day his father took him to see an exhibition of Diane Arbus. Her photographs focusing on the weird and dark side of America made a lasting impression on Gregory.

Gregory Crewdson shoots picture perfect rural and suburban scenes. His subject is the underlying psychological threat of the supernatural or subconscious (the ego that is estranged from itself). Unlike other photographers that use staged sets, like Cindy Sherman and Jeff Wall, he does not cite art history in his photographs but rather popular movies such as Vertigo and Close encounters of the third kind, and SF literature like Ray Bradbury’s Something wicked this way comes.

One of his favourite movies is Safe (1995). In 2016 I did a shoot inspired by Crewdson and specifically that movie.

The work of Gregory Crewdson

Gregory Crewdson works at the Yale University School of Art (as director of graduate studies in photography), where he also got his MFA in 1988. He is represented by Gagosian gallery (NY).

As a kid Gregory watched Blue Velvet by David Lynch, it has remained one of his favourite movies. No shit Sherlock. And he probably likes horror. While working on this series his first marriage ended. The photographs took a turn for the gruesome.

Check out his attention to detail. And the stereotypical small-town America clearly present in the background. Those are models he built for the occasion.

This is so subtle, I have come to love it over time. Proper documentary photography that could easily have been shot by one of the aforementioned photographers. Until you notice the perspective. Who / what is this?

Twilight, Gregory Crewdsons favourite time of day, where the intensity of the light outside is the same as inside, the perfect balance between natural and artificial light. The time just before the monsters come.

This small series has some overlap with Twilight. Gregory got the opportunity to shoot in this house that was then recently vacated. He hired (known) actors to emphasize the meta-story: this is the blueprint of a story.

The actors, by collective memory, bring all the films they played in together into that one frame by Crewdson, a scene of domestic loneliness and autism. Does the (wicked) alien come from outside, or does he live inside you?

The (mentioned earlier) documentary Brief encounters by Ben Shapiro was filmed during the creating of the photo series Beneath the Roses. If the work intrigues you, please check out the documentary. If you can’t find it online drop me a line, I can Wetransfer it to you.

During this series his second marriage came to an end. I guess hard work is incompatible with family life. Also apparently Gregory is kind of a loner, he loves to swim long distance in open water and hike through the woods by himself, maybe that doesn’t help.

I personally think Mr. Crewdson had a relapse here and would maybe have profited from going to a real sanctuary. He shot this black and white series with a small crew in Cinecittà (on invitation) using a digital camera. Cinecittà is an area of decayed film sets from the biggest Italian movies by the likes of Fellini. This is all too literal for me, I don’t see it. However, without this valley we might not have seen the peak that is his next series.

The pinnacle of the personal (consistent) world he has been building that was still a bit immature in Beneath the roses. I think it has reached maturity here.

The fact that we recognize his images proves we’re used to experience the world through these symbolic surrogates. They are not real, but maybe they’re true. Like all our psychology, our fears, doubts, loneliness, lack of communication and impotence are. These truths have always been depicted in our culture.

Now that I finished writing I realise some of my favourite photographs by Gregory Crewdson are not in here. He has made many more in each series and they are all of a consistent very high quality. If you like this style, check out one of his books or, if possible, go to an exhibition. The real photographs are able to communicate the feeling a lot better.

So, what’s your favourite series by Gregory Crewdson?