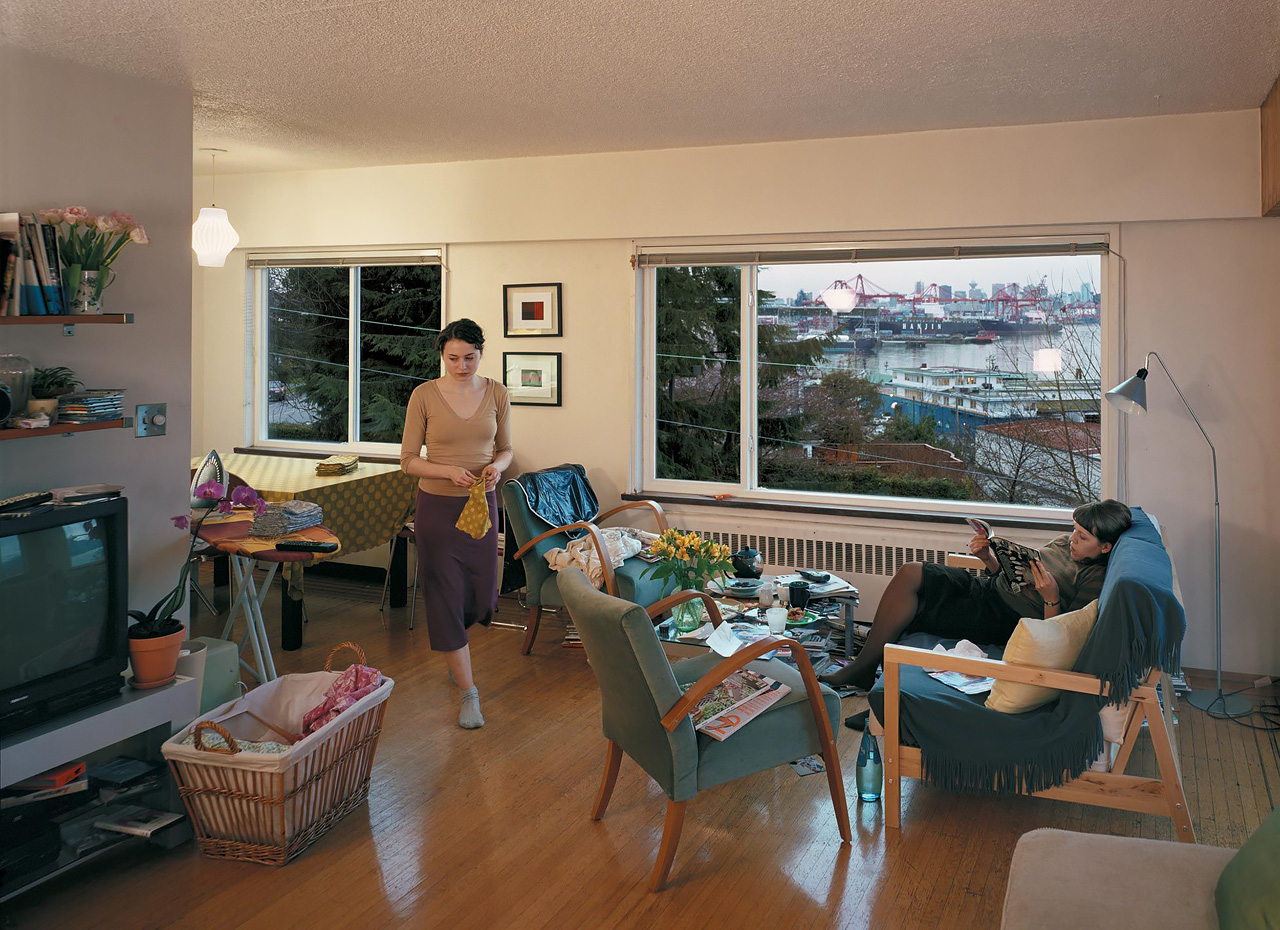 Jeff Walls A view from an apartment woke me up regarding photography as an artform. Even though I far from comprehended it when I saw it for the first time in 2013 (in Stedelijk museum Amsterdam). Jeff Wall wanted to shoot a scene in which there was outdoors as well as indoors, following a discussion with a friend of his, if I remember well. He rented this apartment with a view of the harbour in Vancouver. A model lived there for several months, with a tripod mounted videocamera that she could switch on and off herself. Jeff Wall was looking for a genuine scene he could reproduce.

Like many of his photographs this is printed large and mounted in a lightbox. It was printed in two pieces with a big ugly horizontal seam across the middle. In addition, the left part (with the television) is out of focus. Both seem unintentional and sloppy, which I don’t understand. That said, as a whole, this image is fascinating. Art imitates life, but better. The expressions on the two girls are so ordinary they become interesting in the context of the artwork.

Jeff Wall lives and works in Vancouver, Canada, where he was born in 1946. He is well embedded in the artworld. As an art historian he also writes essays. This adds to the legitimacy of his artworks. From the beginning he positions himself as a visual artist rather than a mere photographer.

In 1970 Jeff Wall obtained his MA at the University of British Colombia. He then studied art history at the Courtauld Institute of Art in Londen until 1973. Currently he is a professor at the University of British Columbia and European Graduate School. Like Gregory Crewdson he lectures at the university he studied at and lives in the town he was born in. I wonder, does this affect their photography? It is probably no coïncidence that the staged larger than life cinematic photography has come to fruition in the minds of people that are not constantly on the go chasing the next image, but who are working as university professors in their known safe environment. I like the subjects, the hidden layers, resulting from their thought process and the careful compositions.

In 2002 Jeff Wall received the Hasselblad award. In 2006 he became a member of the Royal Society of Canada and in 2008 he received the Audain prize for lifetime achievement. But his career begins in 1978 with a backlit transparancy. During a trip through spain in 1977 he was struck by large backlit ads at busstops and such. His photograph of a matress in a messy room is printed on Cibachrome (not widely available now anymore) and mounted on a lightbox. Jeff Wall calls it an ‘installation’, NOT a photograph. It is called The destroyed room. Its composition goes back to Delacroix’ painting The death of Sardanapalus. Jeff Wall shows us the aftermath of the tragedy. Well done embedding your work in art history mister Wall.

Jeff Wall continues to produce large scale colour photographs mounted on lightboxes some of which echo famous paintings. Notably Picture for women after Folies Bergères by Édouard Manet. This painting by Manet is in the collection of the Courtauld institute in London, where Jeff Wall probably studied it. Picture for women is about the male gaze. There is a lot that can be said about it, but I rather watch. According to Jeff Wall himself these are his first two works that succesfully challenge photographic tradition. In stead of small black and white photographs far away from popular culture, these look like large backlit ads.

Jeff Wall is inspired by an image he sees, in real life. A moment, a slice of time (Mimic, Men waiting). Sometimes pursuing it deliberately, as with A view from an apartment. He also cites dreams (The flooded grave), literature (After invisible man, After spring snow) and painting (above) as source of inspiration.

Traditionally photographers react to what is in front of their lens, they document (even though a photograph is but a thin slice of space as well as time, dixit Susan Sontag). What I like about Jeff Wall is that his works obviously have passed through his head, much like in the way other artforms work, like painting, literature, sculpture. Those works are 100% filtered by the brain of the author because the author creates them from raw materials with a certain vision. Photography traditionally only lets the author ‘choose’ from a fixed reality. Jeff Wall clearly breaks this barrier. In that way it may be just to consider him a visual artist rather than a photographer.

Jeff Walls central theme seems to me to be human non-communication, even alienation between us as individuals. It is already visible in his Picture for women but is apparent in many works, not only these but for instance Mimic (racist animosity), A view from an apartment (two people engaged in their own world, regard turned inwards), Monologue (guy talking, nobody listening) and culminating in Summer afternoons. This imho is a common subject in contemporary photography, maybe because it is a development in current society artists need to comment on. Individualising, the demonising of the other. Or maybe I just see it that way, because it interests me, or I happen to see the world like that. What is your take on this? Would love to discuss.

[Addition:] I shot ‘Marian holding an apple’ inspired by Monologue.

My favourite photograph by Jeff Wall

I was most impressed with this relatively small photograph by Jeff Wall. It’s an inkjet print not even mounted on a lightbox. In fact it is quite dark, and also because of its size you have to look closely to see detail. At first I thought that it was water that poured from the shoe in stead of sand. I like it more with water (which is afterall snow transformed, lending an extra dimension to the title). But true to the literature that inspired Jeff Wall here, it has to be sand, for it sounds ‘like the most enchanting hourglass in the world.’ (The end of chapter 34.)

In accordance with the alienation / lack of communication I perceive in his work the girl sits with her back to the viewer, looking away from him. In the novel the man sitting next to her ‘had no idea how to behave while a woman was inspecting her shoes, so he turned away and began to look out of the window with intense concentration.’

Even the perspective is perfect. Though the suggestion is that you sit next to the woman in the car, as is the situation in the novel, by the angle of view (there’s just slightly too much distance) you can see that you are in fact outside of the car. It is but a scene presented to you. Despite the intimacy of the scene, you are kept at an inevitable distance.

What do you think of the work of Jeff Wall?