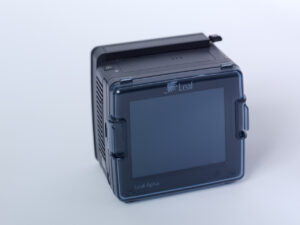 For a complete writeup (including prices) of my journey towards my current Cambo + Leaf Aptus 22 setup follow the link. In this post I will talk specifically about the Leaf Aptus 22 and share two quirks that might help other users that encounter problems with the Aptus digital backs from Leaf. Also included are full res SOOC sample photographs for you to judge. (SOOC = Straight Out Of Camera.)

A the end of 2005 the Aptus 22 came to the market as a state of the art digital medium format back, but as of now it shows its age. Especially the screen is very bad, tethered liveview is only black and white and very slow, battery life is bad and startup of the back is long. Also, Leaf uses active cooling for their sensors so there is a fan in the back. This does not help with battery life I imagine and it also makes some noise that can irritate in a quiet studio.

That said the backs shine especially on a viewcamera like the Cambo Ultima and tethered to a computer, in which case battery life is no issue. And to drown out the noise of the fan I put on a cool record 🙂

Around 2009 Leaf superseded their original Aptus series with the Aptus II that came in several variants including a 33 megapixel version (Aptus 7 II) which I tested against the Aptus 22. While being a lot more expensive and having 50% more pixels it provided the same image quality to my eye, so I went with the Aptus 22. After checking online, the Aptus 5 II, its direct successor, seems to be pretty much the same machine, at least as far as image quality is concerned, as the Aptus 22.

The Aptus 22 has a couple of peculiar aspects that you need to know beforehand.

As mentioned in the other post, when mounted on a view camera this back needs lenses with shutters in them. This is not weird because it was standard at that time. However, modern backs use an electronic shutter and are in that aspect more flexible regarding the setup with large format lenses and viewcameras.

Finally, what it’s all about for me is image quality. And the Aptus sure as heck delivers. I’m willing to sacrifice a lot for image quality, except I had to consider my fairly low ceiling on the price.

For the price, the Aptus 22 is hard to beat. Because of the size of the sensor and the clean files at ISO 25 you can get absolutely stunning photographs from it with gorgeous in-focus areas and very smooth transitions to out-of-focus areas. In practice I have not had problems with moiré / aliasing that could not be easily fixed by slightly changing the distance to the subject and / or some post processing.

The ultimate reason for this blogpost was two quirks I have ‘solved’ during my time with the Aptus 22 and I wish to explain these to you so when someone searches online (as I did) for the phenomena they will hopefully find these solutions quicker than I could using mere trial and error.

Too many photos on card

Early 2019 my Aptus 22 stopped working while on a hike in the forest. While I was using it the battery was nearly depleted so I switched it off and changed the battery. When I pushed the ‘on’ button the indicator light started blinking orange as usual, only it never stopped blinking orange. Usually it turns green after some time and the Aptus gives of a beep to signal the back is ready, but it did not anymore. The weird thing was, it kept blinking orange indefinitely as if it were stuck in some startup routine but was still functioning otherwise. Also back home trying to use it tethered, it would not startup anymore beyond the blinking orange light.

After some testing it turned out that while the Aptus 22 has no problem reading from and writing to larger CF cards (Compact Flash cards, I use a 64 GB CF card) it has a problem when there are many photographs on a card. During each startup it indexes the card entirely (or something like that) and because it’s so slow it never gets to the end when you have many photographs on your card. I have used it with about 100 photographs but somewhere above that amount means the Aptus 22 will not startup anymore, regardless of how you want to use it (even tethered).

Solution: insert an empty card when the back does not startup anymore, or use it tethered without any card. Caveat: because it does not start up at all with a card with too many photographs, you also can’t format that card. So you have to keep empty cards at hand (that you emptied on a computer or formatted before they reached the limit of photographs).

This one is a bit weirder still. I was shooting different types of fabric and one was a synthetic fabric that had a violent shine to it in the details. With these old backs it is always a bad idea to overexpose because of the harsh cutoff but these were tiny strands in the fabric and I had shot a couple of other fabrics without any problem and wanted to keep the lighting even during the shoot.

After taking a photograph while tethered the back usually gives a beep and the light turns from orange to green signalling it’s ready for the next shot. After a shot of this synthetic fabric the image appeared in Capture One like usual, but the Aptus 22 did not return to its ready state, in stead the Aptus gave three short beeps and the light kept blinking orange. I could restart the back, it would beep for ready, take one shot and the Aptus would hang again after three beeps blinking orange forever. The photograph itself looked fine (apart from the tiny bits of overexposure) on my screen.

I thought the back was faulty so I switched the one Aptus 22 for the other, which behaved exactly the same. Then I started testing the cables and everything else eliminating one by one each possible culprit. It turned out this overexposure was the only cause. I had overexposed earlier without problems but maybe this was too much or the specific pattern generated some static electricity or I don’t know what. In any case, when I exposed about a stop less, both backs resumed working without a glitch.

Solution: dial back the exposure. (Yeah I love an easy solution, took me more than an hour to reach the conclusion though, would have never assumed this could happen…)

One last thing: Capture One has recently dropped support for these older backs in their software. Capture One 11 is the latest version to support the Leaf Aptus 22 according to their literature. I have not checked that personally.

No review is complete without some sample photographs for pixel peeping. The photographs straight out of the camera are mostly underexposed, to preserve smooth highlights. Of course, images from such a back always need some post processing, which can easily be done in Capture One.

Last but not least a photograph outside of the studio, shot in a church at ISO 50 (check out that noise…). The Aptus 22 was mounted on my Mamiya AFD III with the Mamiya 210 f/4 for the occasion.

This concludes my prepared materials for now. If you want more examples, including unprocessed full res tiffs, or have a question about these backs or photography in general, don’t hesitate to contact me, I love to talk about gear.