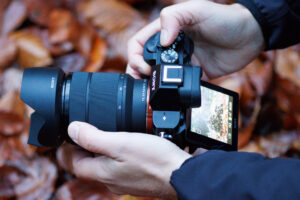 So it has been a year this blog has not seen any new posts. But yesterday I found myself in the forest with Bas Stubert while the light faded fast and raindrops started to form and fall. It was my third photowalk in 2022 and I was fiddling with the menu trying to find the focus peaking function like an amateur. It might be time to sell my gear, no need to drag it along to France, where we are moving to in a few months. Or are we. Or might it not.

It’s not that I started to hate photography like I hate Rembrandt, it’s just for lack of confidence, really, that I stopped doing anything good (writing, photographing, making music). The big cloud made of ‘what’s the use’ and other detrimental irrelevant notions hanging low has been harshing my mellow (as far as that goes) for a long time now.

If not for carbon dioxide and the black swan I should be content spending my days at work in a generic office several degrees too hot doing a mediocre job (not for lack of trying, rather for lack of talent) dreaming about my next vacation, weekend or purchase, to be cursing, later, at brake lights six lanes wide in front of me, profiling myself as an individual distinct from all these others that are in my way, dismissing their ways, cuddling myself in my superiority bubble like a psychiatric patient hugging their knees in the corner of a shower.

The black swan is my book or a new one, or some photography work that I might be able to produce haphazardly which, viewed from the right angle, makes me look like a genius. Need not focus so much on ‘others’, their material posessions and status in this society, rather on maximizing the potential for a black swan to occur, knowing it probably will not. Enjoying the actual ‘work’ going into it, being broke in the meantime not minding. Much like an artist (that we know of, in hindsight), but fully at peace with not becoming such an artist in any collective hindsight.

So simple, but not easy.

Attracting the black swan becomes a goal in itself, as a means to achieve recognition and financial wealth, I have fallen backwards into the same trap.

Have a good day

So here’s me, trying to have a good day, shooting like an amateur. This is all in your mind anyway.