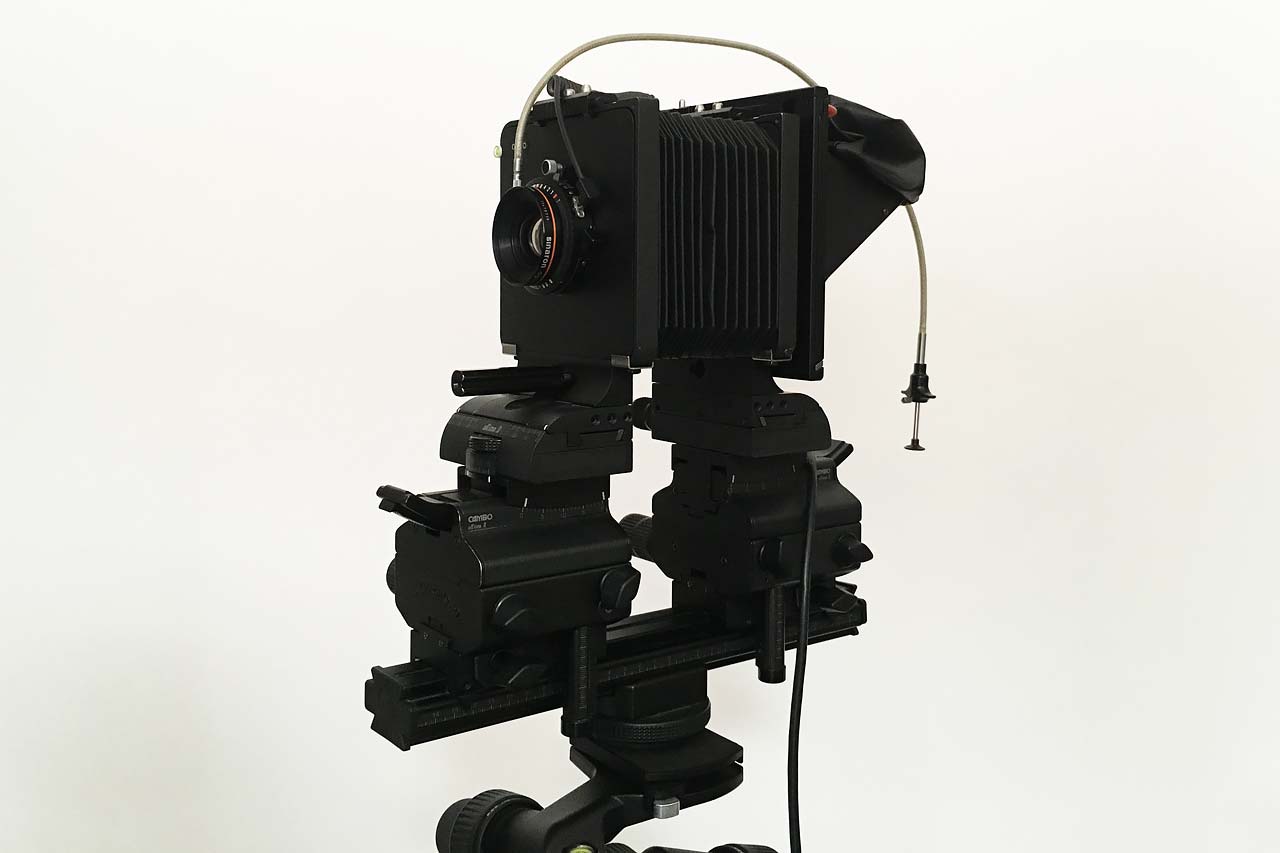 Many years I was hesitant to buy into a large format / medium format viewcamera system, such as the Cambo Ultima 23D with Leaf Aptus 22. After serious consideration five years ago I chickened out and bought a Pentax 645D. When I finally sold the Pentax to get this system two years ago, not all went as planned. This blog post is for newbies like me to get some pointers that I missed initially. Please feel free to ask additional questions in the comments section, I love to talk about gear. 🙂

Confession upfront: I jumped for this system when I thought I would be able to get it complete for around 5.000 euros, but eventually it cost double that amount and seriously hurt my savings. Still not much for a high end digital viewcamera system, but given the age of the components you should be able to get this cheaper with a little patience.

Large Format viewcamera with digital back

A compact camera has every part of the camera in one: the lens, the shutter, the controls, the light-tight body and the sensor. With a viewcamera system everything is separate.

Why is it called large format? Originally viewcameras are made to hold large film sheets, typically 4 x 5 inch or even 8 x 10 inch. With the advent of digital backs the viewcamera was adapted, like the Ultima 23D, for use with a smaller recording surface of around 6 x 6 cm (2,3 x 2,3 inch), which is actually called medium format (as it sits between large format and the smaller more common 35 mm format invented by Leica). But the bulky viewcamera still has that large format feel, and it uses the same large format lenses with large image circle for extreme movements.

I always wanted a viewcamera system, but were afraid to jump in, because I had no practical knowledge of it. That changed at the Fotoacademie, where I learned to work with a whole range of viewcameras. The Cambo Ultima quickly became my favourite, because it is quite small (for a viewcamera), has all the movements in large ranges, works very smoothly and locks easily and reliably. It comes as a 45D (large format) or 23D (smaller, intended for digital backs). I got mine, including sliding back for Hasselblad H backs, a wideangle bellows, a Rollei LensControl and 90 mm APO Digitar with electronic shutter for 2.500 euros, which is a bit expensive considering the condition, in hindsight.

Points to take away regarding the Cambo Ultima 23D:

Now I needed a digital back. My whole career as a photographer I have always owned two of the same camera’s so I would have backup when one failed me and until then use them alongside. So I wanted to buy 2 digital backs of the same brand and preferably type. After extensive research I wanted a Phase One P45 or newer, but could not afford one. They are still on my list though. I looked into Leaf because especially the older types are relatively good in terms of image quality. I didn’t like the fan and the touch screen, and I still don’t, but that is a minor issue if you look at the image quality compared to the price.

The Leaf Aptus 22 has a 36 x 48 mm sensor (twice the size of ‘Full Frame’ like the Canon EOS 5D or Nikon D850) without anti aliasing filter. This means it records the light without smoothing the image and as such can take very sharp, very detailed photographs, at the expense of artefacts sometimes which you can remove in Photoshop. I found a used Aptus 22 at Cameraland for 1.900 euros which they let me borrow for a week (!) alongside an Aptus 7 II (!) so I could assert the differences. A second Aptus 22 turned up at Calumet after some phone calls while I was there for something else. It sold for 2.000 euros, but Calumet threw in a used Mamiya AFD III + 80 mm for free which took care of my wish to have a backup system.

Points to take away regarding the Leaf Aptus 22:

So by then I had found out that I needed another sliding back to fit the Leaf to my Cambo. I found one on Ebay for 900 euros. Could have been cheaper probably but I didn’t want to wait any longer. When I got it (from Finland) the sliding part was stuck. Luckily the Cambo factory is in Kampen which is an hour’s drive from my house, so I could easily get it serviced there. They showed me it had also been damaged, but that it would not affect the photographs and functionality. They serviced it for 100 euros. In total this was too much money I think. But at least I have the new sliding back now, with a good groundglass, it slides smoothly and includes the Leaf digital back adapter. Also it came with a rather luxurious focusing aid that is normally sold seperately. Attached to the sliding back came a mirror and magnifying glass assembly that lets you inspect the image on the groundglass without having to put a dark cloth over your head against the light.

While waiting for the sliding back to arrive, I had sourced a couple of lenses with mechanical shutters. The Fotoacademie had a 45 and 90 mm already mounted in the Cambo 23D lens board that I could take over for 1.400 euros, which is on the expensive side (we had a miscommunication about the price, but I still decided to get them while I was there, being impatient). The mechanical shutter is great and the lenses are as well. I had an old fashioned cable release lying around which works perfectly. With the Cambo also came a trigger cable for the back and the Fotoacademie gave me a slighly longer one with the lenses.

Even though this was a fine setup already, for closeup work on products for instance the 90 mm just doesn’t cut it. So I wanted to get a Sinar Sinaron 120 mm f/5.6 macro, which has legendary quality (according to the internet). With patience I later found one for only 650 euros including the Copal 0 shutter on Ebay. Needless to say I pounced on it. When it arrived it was flawless. I bought a lens board and the regular bellows new from Cambo and mounted everything. This is now my favourite lens.

To be able to use this stuff I also needed a heavier tripod and a case, which set me back another 1.250 euros. For the Mamiya I found a nice like new 210 f/4 on Ebay to be able to shoot in the woods and for portraits, and some new batteries from a local store for when I’m on the road for a total of around 300 euros.

Some pictures to clarify what has been said:

I guess you could say such a system is not for everyone. But I am very happy with it. It is a very capable system and can yield absolutely stunning files when used correctly. It’s future proof, a newer digital back would fit right on it, with a new adapter if it’s not a Leaf. New and old lenses as well, by all sorts of manufacturers. It can deliver stunning and amazingly professional results not attainable with any other system of the same price, especially in studio portrait, product and interior photography.

However, dropping 10.000 euros into a Canon / Nikon / Sony / Pentax system would give you a host of other possibilities like shooting fast and with less light (even in total darkness nowadays), the ability to take your gear with you easily, judging focus and exposure from the screen, tethering to a laptop… Those are things I really miss.

The Cambo and Leaf set: inventory

The large format viewcamera with medium format digital back system I now own is a minimalistic system that is quite versatile but nothing extreme, you could add a lot more. It has some backup features so the risk of you looking like an arse in front of a client is reduced. This is the complete inventory for your benefit. This is not to brag but to show each and every part that you need to get a working system. If a part is redundant or for backup it is marked in the list. The last column is the price I paid in euros, so you can compare when you see something for sale. With the exception of the 120 mm and the Aptus backs I think I overpaid slightly. Prices include taxes.

Using the Ultima 23D with the Aptus 22

To work comfortably with the digital back mounted on the viewcamera you best shoot tethered. I use a desktop pc with firewire card, this worked right out of the box with the special Mamiyaleaf firewire cable. Capture One recognizes the Aptus 22 and can control it and show the liveview image (black and white only). You have to startup everything in a specific order however which leads most of the time to me restarting the pc to get it to work, but once the camera is recognized it keeps working reliably until I close everything.

Nice about Capture One is that it has a wifi connection to their app, so your client (when present) can follow your work on a tablet without hanging over your shoulder.

What are your experiences with this sort of camera system? New or second hand? I’d love to hear from you. If you want to know anything regarding large format, medium format, digital backs, not necessarily pertaining to the Cambo Ultima 23D or Leaf Aptus 22 backs, ask your question below or contact me directly. I love to talk about gear!