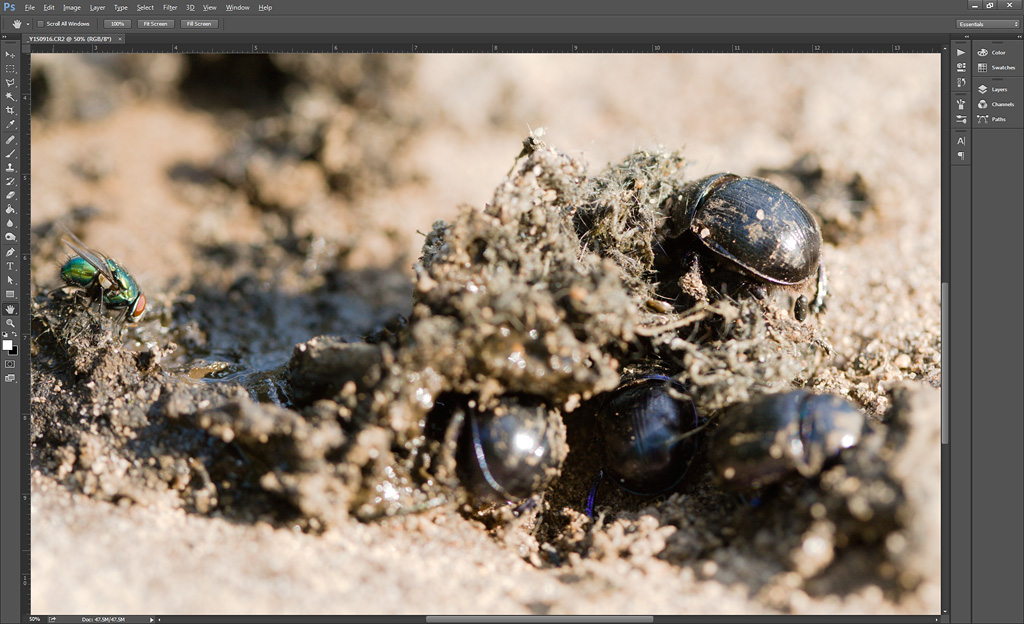 For the longest time I have had gripes with Photoshop. For example: how come the undo-redo chain (which Photoshop calls “history”) isn’t automatically assigned to ctrl+z / ctrl+y or, if need be, ctrl+z / ctrl+shift+z? Now I have to dive into the key-commands in every Photoshop installation in my life to remove the absolutely useless one-level only “undo” Adobe is the only major software developer I know to still support and assign the chain manually. And why is Liquify in a separate screen that forgets how much I was zoomed in originally and that has a completely separate undo? But alright, chalk it up to creative programming chez Adobe and live with it.

The following 3 Photoshop bugs however are hindering my use of the software (CC2014) as a professional photographer so much that I stopped working to write this rant. These bugs in Photoshop need to be addressed or I will quit photography and become a painter!

1) When I switch to a different layer, edit something (one stroke with the brush in the mask for instance) and want to undo this (which is very often, because the first stroke seldom is the best stroke), Photoshop SWITCHES BACK TO THE OLD LAYER from before when I switched to the new layer where I want to continue editing immediately. What’s up with that? This has been bugging me since version 4.0 (the first Photoshop version I used) and I never talked about it in public, because it is so stupid. I kept thinking someone at Adobe was bound to notice this and it would go away. But it didn’t. Once I tried to think of ANY scenario where one would want to “undo” an active-layer-switch together with the first action one did in the newly selected layer. I could think of exactly NONE scenario. Can you think of one? Why is this the behaviour?

2) Recently, and I believe this is the most “bug” rather than “feature” (insert crying smiley) of my 3 points that are WRONG with Photoshop, the whole program starts ignoring key-commands. I know it is possible to have the focus in some editing-input-box so when you try to select a different tool you are only typing into that input-box but since the previous version (CC) Photoshop sometimes just starts ignoring the keyboard altogether, without any active input-box that I can see (and pressing escape does not help). The only thing left to do is select the tool with my cursor. When this happens it seriously lessens my cool. When I’m working on a specific spot I do NOT want to move my cursor completely out of the way to select a tool, especially not when I’m switching quickly back and forth between tools.

3) Recently background-saving was introduced. Very fancy! I never had problems waiting for a save but ok, now I can continue editing while saving. However: when a background-save is in process I CANNOT save again, there’s no queue?! It just says I can’t and I have to wait. And if I’m working full screen (which I am almost always) I can’t even see what percentage my previous save is at. So I have to exit full screen or keep trying to save like a moron with a serious case of OCD. Not cool. Just display a blocking progress bar or make a queue.

The inevitable call to action:
Am I too harsh? Or are these points bugging you as well? Did I use too many uppercase letters? Did I miss some other idiosyncratic behaviour of Photoshop? Please share in the comment section!